DALTON-BROWN…these little shortcuts I took did indeed free up some valuable time but our food bills were increasing. We were paying more money for the convenience of opening a box of cereal and a box of milk for breakfast

WHEN you think about the food and beverage industry, it’s hard to imagine anything beyond restaurants and the actual dish which is plated in front of you along with your beverage of choice.

However, for every meal you consume there’s a whole ecosystem churning behind the scenes to ensure your culinary experience is pleasurable.

To put things into context, when you order a salad at a restaurant you are enjoying the end product of farmers who planted the produce, nurtured it for weeks and sometimes months, reaped it and sold it to clients (supermarkets and vendors) who then transport it, package it, and store it so that restaurateurs can source it and have a chef prepare it the way your like it.

Along this supply chain there are various points of quality control which require scientific rigor and scrutiny to ensure standards are met. 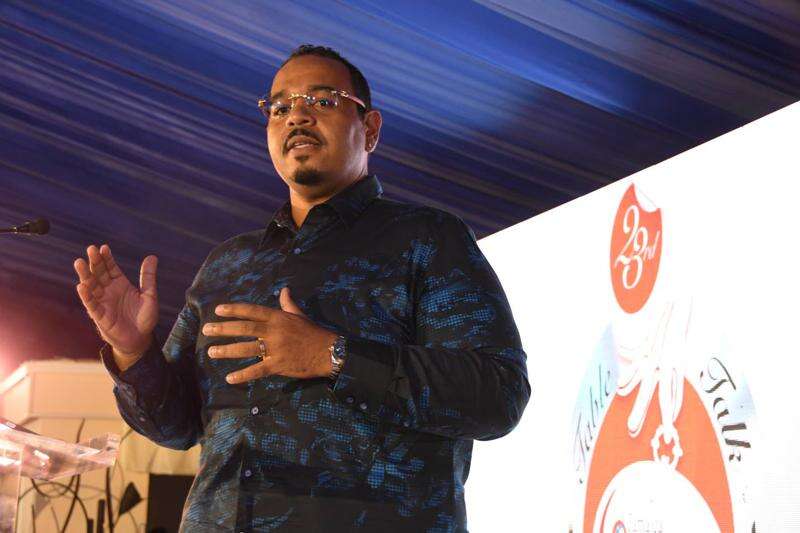 WRIGHT…show your team that there is more to it than the head being you; there is a role there for them to play and opportunities for them to grow (Photos: Garfield Robinson)

The entire process of getting that salad from the farm to your plate can cost millions of dollars, but all those steps aren’t always apparent to the consumer up front.

This, among other issues, took center stage at the recent staging of the Jamaica Observe Table Talk Food Awards Foodie Seminar, which emphasized that food is a business.

Emma Sharp Dalton-Brown, a freelance journalist and trained chef, spoke on the issues of shrinkflation and slimflation and highlighted that there’s a delicate balance between the ready-made food items consumers purchase at the supermarket and home-cooked meals they decide to prepare by themselves.

Dalton-Brown noted that cooking meals at home every day is daunting and tiring. To that end, she concluded there’s a place for both convenient food items as well as home-cooked meals. She explained it’s all about balance.

“When the pandemic hit and our prime minister sent all our students home, not even I was prepared for just how much I would be cooking. I would go into the kitchen at 6:00 am and for the next twelve hours all I could do is cook and wash up….there was no reprieve for me, and I grew to resent it. [where] I needed a break, and this came in the form of several short cuts,” she admitted.

On one hand, she explained that the convenience is a persuasive tactic but on the other hand she admitted that those items are usually more costly but are part of a wider food ecosystem.

“These little shortcuts I took did indeed free up some valuable time but our food bills were increasing. We were paying more money for the convenience of opening a box of cereal and a box of milk for breakfast — it was breakfast over which I did not have to labour. But think about this for a moment, several people labored over getting the box of cereal and any of the takeout that I got; other people were laboring for my convenience,” she highlighted.

Another presenter, PJ Wright, restaurateur and entertainment director, emphasized that there’s a service component of the food and beverage industry which is carefully curated to ensure patrons enjoy an optimal experience.

Wright stressed that good service is a culture which all staff must understand for themselves. He said once staff believe they have a stake in the business, their ownership drive automatically fuels better customer service.

“Show your team that there is more to it than the head being you, [that] there is a role there for them to play and opportunities for them to grow [and] they will be motivated to work hard and improve the overall experience of the customer,” he said

According to a 2018 United States Department of Agriculture (USDA) Foreign Agricultural Service report, the consumer food service sector in Jamaica generated sales estimated at US$700 million in 2017, five per cent higher than 2016.

Independent food service establishments constituted about 60 per cent of those sales while chain establishments contributed the remaining 40 per cent. In 2017 Jamaica imported US$890 million worth of consumer-ready food and beverages, of which approximately 60 per cent were intended for the hotel, restaurant, and institutional (HRI) sector, while the remaining 40 per cent were channeled to household consumers via retail stores such as supermarkets and smaller outlets.

A small but growing subsector is catering, which supplies food and beverages to airlines and event venues.

The World Bank reported in 2019 that since the post-farm-to-farm ratio of value in the food system is much lower in developing countries, the estimated value of the global food system is at roughly US$8 trillion, or 10 per cent of the US$80-trillion global economy.

Culinary experts, business stakeholders and sponsors who were present at the Foodie Seminar told the Jamaica Observe they had every intention to carve out their own piece of that global pie.

The Foodie Seminar preceded the Jamaica Observe Table Talk Food Awards which will be staged on September 29, 2022.