One of the great things about Herberger Institute for Design and the Arts at Arizona State University is an opportunity for designers and artists from different backgrounds to work together.

Students from the School of Design and the School of Music, Dance and Drama recently collaborated to create the lobby screens for the ASU Theater production of “Life of the Miracle Girl.”

Students from the School of Music, Dance and Drama perform in the production of ‘The Living Life of the Mira Girl’ by Matthew Paul Olmos. Photo by Tim Trumble

The four design students were chosen from 14 teams, all from the design faculty by Lisa Pena visual communication course. The teams were organized in the fall and made their first presentations in January, and the final team was selected in early March.

“Playwrights are inherently bridge builders – we always seek to forge mutually beneficial connections between disciplines,” said Karen Jean Martinson, assistant professor of dramaturgy at the School of Music, Dance and Theatre. “It seemed perfect for us to partner with design students.”

Peña said she agrees the partnership has worked extremely well and she looks forward to more partnerships like this in the future.

“When (Martinson) contacted our program, we jumped at the chance to collaborate with the drama group,” Peña said. “Our students have experience developing designs for clients, but these people aren’t usually in the creative field. Working with the drama group has been fun and refreshing. It would be wonderful to join forces again in the future. 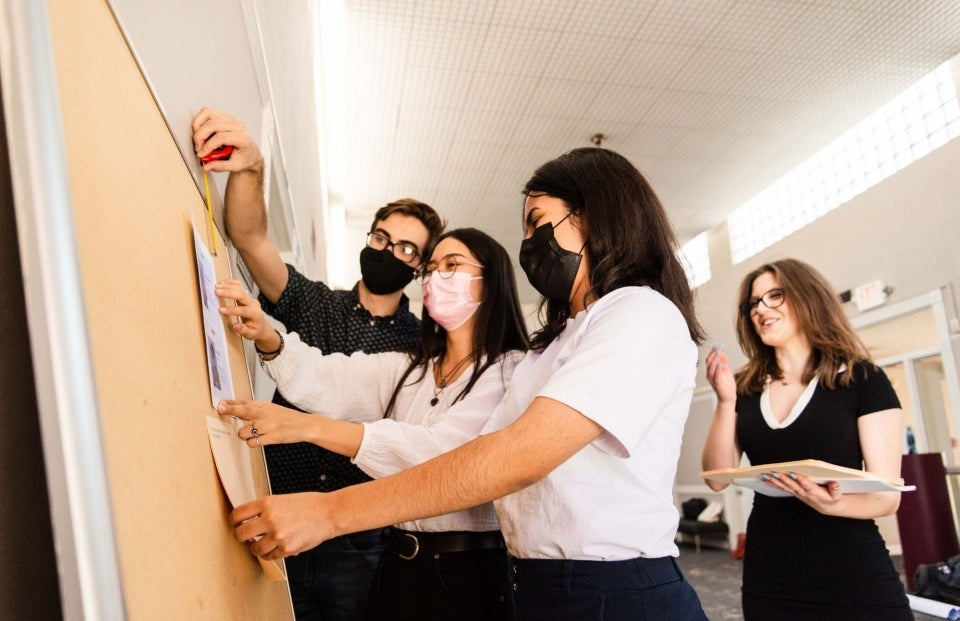 Students from the School of Design designed the dramatic hall displays. Photo by Tim Trumble

The winning students got together the week before the fair to install their creations. Peterson reflected on how working from a script provided them with a unique set of challenges.

“Working with the theater program, we really had to dig into the story of the play and understand the context and then base our ideas on that,” Peterson said. “It’s different from some of our other work where we have a preliminary idea and then create a design.”

Rogers said she believed their team was chosen because they were deliberate in their design choices and the way the space looked.

“We really considered how to display the text with the visuals,” she said, “and how it would be seen by the audience.”

Plata said he enjoyed seeing the design students react to the script. He said he felt all the teams created successful designs, but the selected team really got the feeling of the game.

“I definitely chose them because they understood the meaning of the play and how to best present it to the audience,” Plata said.

As a playwright, Plata studies the story behind the play: the context in which the playwright wrote the story, the setting of the work, and the social implications of the material.

The manufacturing is an original play by an award-winning playwright Matthew Paul Olmos. It tells the story of a premature baby who struggles to survive in the neonatal intensive care unit while his teenage mother, extended family and father struggle with his arrival.

For this play, Plata researched and wrote about teenage pregnancy in America, neonatal intensive care units in hospitals, and the playwright’s poetic language.

Design students created displays incorporating production elements from the show and echoing hospital signage. The panels included information about the playwright as well as the show’s subjects. On another wall, they created hanging folders resembling hospital patient charts with information and quotes from the actors. plus design swatches and cue sheets from the art team. They also created an interactive element where viewers could place their dreams and promises for the future in a sand-filled aquarium, designed to resemble the beach where much of the play takes place.

One of the design students said that completing this project had broadened her perspective and changed her way of looking at future career options.

“Before that, I was looking for jobs in packaging design or business, but now I’m looking at museums and other arts organizations,” Blloshmi said. “Doing something this big used to intimidate me, but after doing this I’m much more comfortable and found that I really like it.”

“the life of the mira girl” runs until April 3 in the High School Theater on the ASU Tempe campus. Tickets must be purchased in advance through the Herberger Institute ticket office.

Watch a virtual presentation of The Design School’s student renderings.